Before going to Eid Prayer

The following acts are prescribed as Sunnah at the beginning of the day of ‘Eid-ul-Fitr before proceeding to the Eid prayer:

How to pray Eid Salah

Rakahs: 2
Extra Takbirs: 6
When: 3 in the first rak’ah before surah Fatiha,
3 in the second rak’ah right before ruku’

Detailed explanation: He will begin the prayer by reciting takbir of Tahrimah (Allahu Akbar). You should raise your hands up to the ears, and reciting the takbir, you give a little pause during which you should recite Thana’ (Subhanak Allahumma…….)· After the completion of Thana’ the Imamwill recite takbir (Allahu Akbar) three times, and after reciting each Takbir (Allahu Akbar) in a low voice, you should bring your hands down and leave them earthwards. But, after the third takbir, you should set them at the level of your navel as you do in the normal prayer.

After these three takbirs the Imam will recite the Holy Qur’an, which you should listen quietly. The rest of the rak’ah will be performed in the normal way.

After rising for the second rak’ah, the Imam will begin the recitations from the Qur’an during which you should remain calm and quiet. When the Imam finishes his recitation, he will recite three takbirs once again, but this time it will be before bowing down for ruku’. At each takbir you should raise your hands up to the ears, and after saying “Allahu Akbar’ bring them down and leave them earthwards. After these three takbirs have been called and completed, the Imam will say another takbir for bowing down into the ruku’ position. At this takbir you need not raise your hands. You just bow down for your ruku’ saying, ‘Allahu Akbar’. The rest of the Salah will be performed in its usual way.

A recommended $10 should be given before the Eid Salah.
This is for all members of your family, adults & children.
The minimum for Zakat Al Fitr is $6.

Zakat al-Fitr or Sadaqat al-Fitr is a duty which is Wajib on every Muslim, whether male or female, minor or adult as long as he / she has the means to do so. The proof that this form of charity is compulsory can be found in the Sunnah whereby Ibn ‘Umar reported that the Prophet sallallahu ‘alayhi wa sallam made Zakat ul-Fitr compulsory on every slave, freeman, male, female, young and old among the Muslims; one Sa’ of dried dates or one Sa’ of barely (Bukhari)

Zakat ul-Fitr is only Wajib for a particular period of time. If one misses the time period without a good reason, he has sinned and can not make it up. This form of charity becomes obligatory from sunset on the last day of fasting and remains obligatory until the beginning of Salat ul-‘Eid(i.e. shortly after sunrise on the following day). However, it can be paid prior to the above mentioned period

Eid will be held on either Tuesday July 5 or July 6, based upon global sighting.
Congregation will be held at the new building at MASJID-AL HUDA SOUTH – 1800 16TH AVENUE, SOUTH MILWAUKEE,  WI 53172.

Short Talk: 8:15am
Eid Prayer: 8:30m
*Please arrive on time as there will be only one Eid Congregation/Jama’ that day. 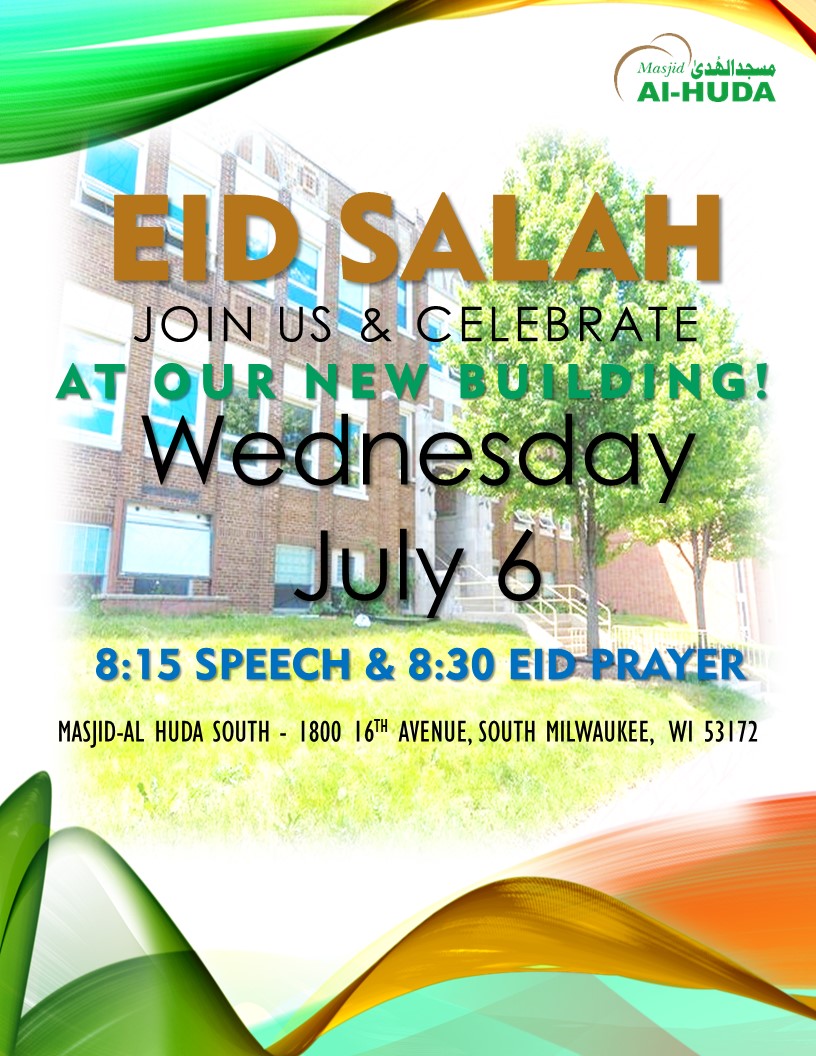